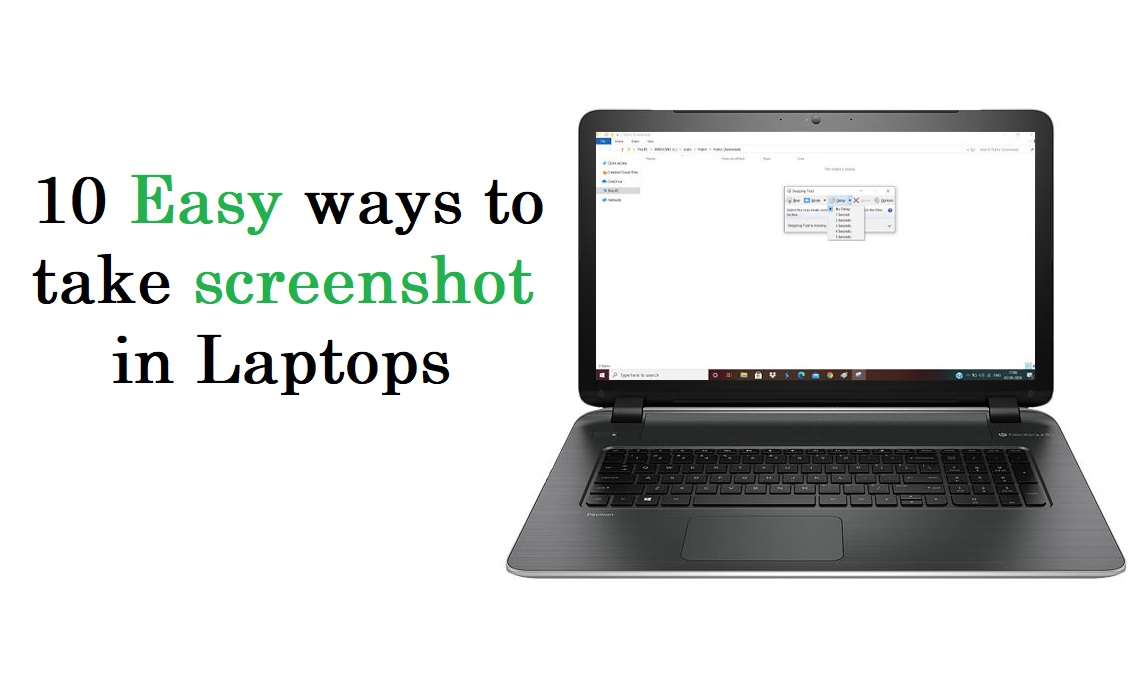 If you’re looking for some of the easiest ways to take screenshots on laptops or on your Windows PC. So, then you’re here in the right place. Here, you’re gonna learn how to do that in the 10 simplest ways. Some of these methods include just simple in-built features of operating system and some of them include some basic software that can easily do this task. These methods can take screenshots of your particular piece of screen and as well as the full entire screen of your laptop.

So, let’s start up with our easiest method that you can use, which is using the Print Screen button built-in on your keyboard. There on the top right corner of the screen, you would see a Prt Scr button that is an abbreviation of the print screen, this abbreviation can be in any form just look out there. Now, let’s start with this method.

You just simply have to press the Control Button and then while pressing this CTRL button you’ve to click the Prt Scr button as well (CTRL + Prt Scr), Then a screenshot without any sound or any other notification will be taken and stored in your clipboard (clipboard is the place where all of your data store that you’ve copied from your device, remember its a temporary data storage).

I hope so, you’ve done it in the right way, Now You can paste this screenshot anywhere you want, If you want to save this screenshot in a particular file, then you can simply create an empty bitmap image file on your desktop by right-clicking on your desktop and then clicking on new and then on a bitmap image (Desktop>Right Click>New>Bitmap Image), hence your empty image file will be created, then right-click on that file and open with Paint or any other editing software and then paste there or click Ctrl + v to paste it.

Remember You can easily use this method on any device that is using the Windows operating system, which means you can use it for laptops, you can use it for desktop computers as well. This is the easiest way I’ve found and I’m using it since I’ve bought my first Windows computer.

Now, method two seems to look sam but you can use it if you’re having trouble with your control button or that method doesn’t work for you, Then you can use this second alternate method for the same function of taking screenshots.

In this method, You just have to press the Alternate Key along with the Print Screen key (Alt + Prt Scr), And hence same as in the first method, A screenshot would be taken and would save in your clipboard, And then you can save/paste this screenshot in any program or file, where you wants.

You just have to do the same as we did in methods one and two, Press the windows button, and while pressing the windows button you’ve to press the print screen button as well, Windows + Prt Scr when you’ll press this button your screen will blink for a short interval of time. And then a screenshot will be automatically saved in your Pictures>Screenshots default directory of windows.

This method is a bit tricky and might you’ve never seen or used this method because it does not work on every operating system of windows, Remember this method is a feature of an application called Xbox Gamebar, This software must be installed on your laptop or computer to use this method.

Drawback: This method won’t work on windows 7 or below this version of windows, You can only use this method on Windows 10, 11, and above.

So, You’ve to press the Windows key along with the G key to use or enable this software (Windows + G), And then on the left top corner, You’ll see a camera icon that would be indicating screenshot, You’ve to click on that icon and your screenshot will be taken and will be saved in your windows default video directory Videos>Capture. You can also open your Xbox game bar app by searching it in the start menu. 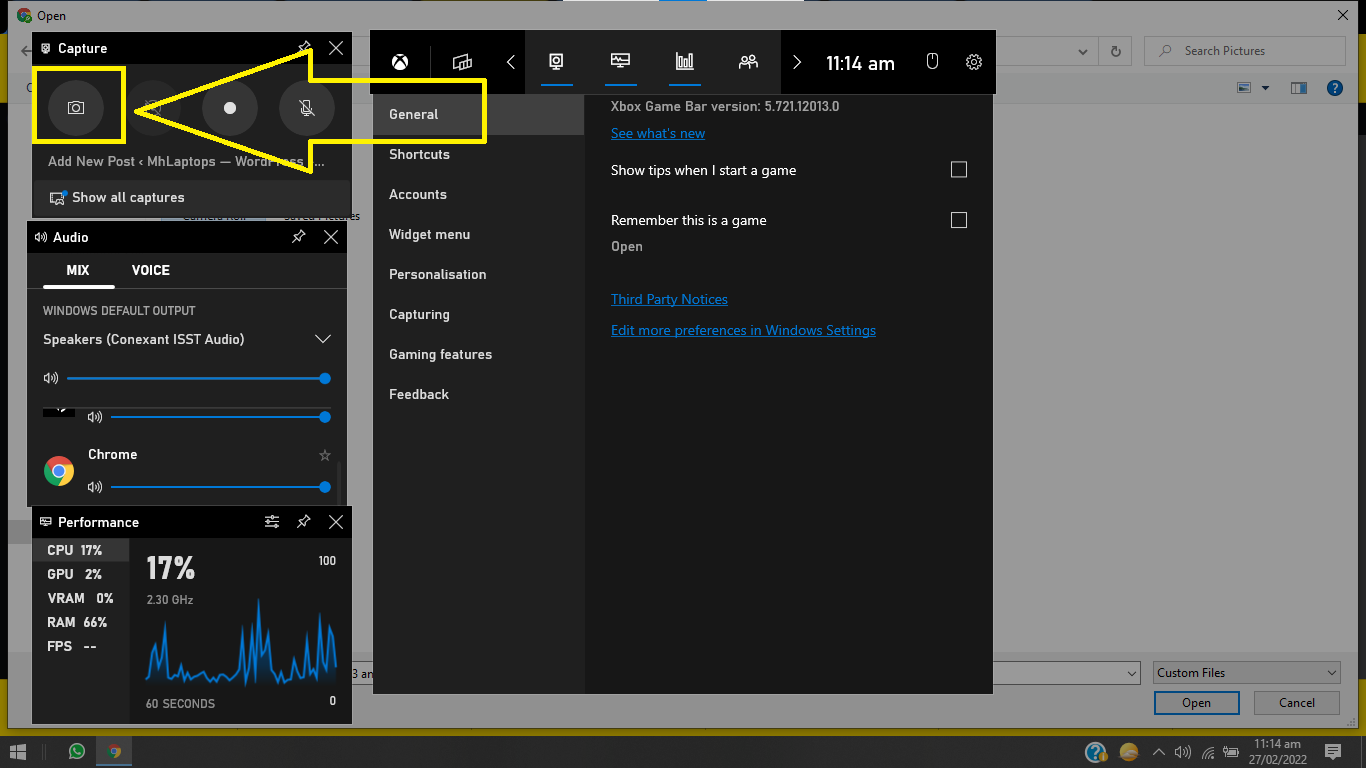 Where is the Xbox game bar default directory?

You can also find this directory of your Xbox game bar default capturing directory, By going to Start Menu>Settings>Game Mode Settings>Captures>Open Folder. There you’ll redirect to the default directory of your game bar recordings and screenshots etc.

Pro Tip: This Same method can be used to record your screen or our gaming videos. Xbox Gamebar has many gaming features.

This is the fifth method of taking screenshots that I’m going to explain, This software can easily take a screenshot by using simple steps. There are multiple options to open this software, So I’ve tried to cover both of them.

When You’ll press these buttons along with each other, A Screenshot taking tool would be open, And there you would have four options to take screenshots; 1st one would be taking a screenshot of a particular area by a rectangular selector, where you can easily choose a rectangular area of your screen for a screenshot,  2nd one would be Freeform selector, where you can easily select an area of your screen in any condition circular, rectangular, etc, You can freely select an area.

Whenever you would use this method you’ll see a popup along with your screenshot, You can click on that and your Snip & Sketch tool will be opened, There you can save (CTRL + S as well) or copy that screenshot and use it anywhere you want. In this 2nd method of taking screenshots by using the snip & sketch tool, You can just simply search “Snip & Sketch” term in your start menu, And a software would appear there, You’ve to open that software and then have to click on the new button of that software and then same as in its first method a rectangular selector would appear, You can choose an area and then save or copy that screen where you wants.

So, firstly none of that methods would fail that I’ve explained above, but still if you’re having some issues, Then you can use these following apps to take screenshots, Remember these apps are third-party and not officially by Microsoft or apple OS’. The following methods or apps are the remaining five methods of taking screenshots.

Which is the best app to take screenshot?

How to take screenshots in windows 7?

You can easily take screenshots using all the above methods except the fourth one.

How to take screenshots in windows 10?

All of the above-explained methods can be used to take screenshots on windows 10.

How to take screenshots in windows 11?

All of the above-explained methods can be used to take screenshots on windows 10 as well.

How to take screenshots on a MacBook?

How to take screenshots on android mobile?

You’ve to press the Power Button and Volume Down button both at the same time to take screenshots on your android mobile.

How to take screenshots on iPhone?

All Links that are being used for Buy Now are taken from Amazon Affiliate Program. We may earn a bit commission whenever you buy from our links. Thanks